Steven Hoggins: "The reason to introduce philosophy into schools is to give children, who would not otherwise have the opportunity to, the chance to practice thinking well, about ideas involving life, knowledge, meaning, existence, ethics and language."

I met Steve @ Sophia Networking Meeting, last July, @ Aveiro. In this meeting we talked a lot about questions, because the theme was "questioning questioning". Steve shared some of his time answering my questions (than you Steve!!). 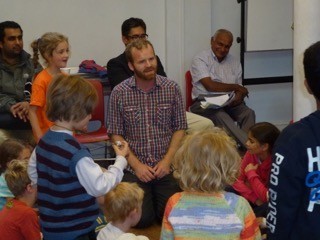 I was in the final month of my university teacher training course. I was in a small, rural school in Devon one lunchtime, leafing through a magazine and I came across an article written by Peter Worley of The Philosophy Foundation. He was describing the reasoning, critical thinking and evaluation of ideas that he thought philosophy could add to a child’s education. I had studied dialogic teaching methods and had combined it with some of my own experimental ‘critical thinking’ exercises but Peter’s stuff seemed like it was way ahead. 6 Months later I was in London, attending his training.

After training, there weren’t any opportunities to teach p4c as a full-time job. I instead took a job as a regular classroom teacher. It was 3 years before enough of an opportunity arose for me to leap into the world of p4c. One spring The Philosophy Foundation offered me a contract for a few hours work. I gave up my teaching job in July and moved over to facilitating philosophy sessions as my main job. They were lean years at the beginning but I slowly got better and was offered more work. Now it is my full-time job and I couldn’t think of any better.

Hahaha! What a question to ask a philosopher. In the broadest sense, no, philosophy is not essential to life. However, if we think within the sphere of education, where we deem maths and science as necessary subjects of study, then yes, philosophy is as essential as mathematics. The philosophy we do in classes practices good reasoning, argumentation, critical engagement, creative thinking and effective dialogue. These areas do not stand alone either, they underpin how we think in all other subject areas. Also, as the

We should take philosophy to children, that is the real aim, but educational institutions can help that (they are full of children!). The reason to introduce philosophy into schools is to give children, who would not otherwise have the opportunity to, the chance to practice thinking well, about ideas involving life, knowledge, meaning, existence, ethics and language. As state education is mandatory here, targeting schools gives us the best chances of getting to all children.

How is P4C developing in your country?

This is the kind of question I am terrible at. I don’t know the general condition of the movement. I am mostly in class teaching philosophy or helping run the charity I work for, The Philosophy Foundation. My colleagues are more involved in the wider picture. I can say that I started this job 5 years ago and at that time we only worked in a few schools. Now we work in over forty schools a week and I have got to know Sapere and Thinking Space, two other p4c charities in the UK

This is not something I really considered until a recent SOPHIA meeting in Portugal. The theme was ‘Questioning questioning’ so we thought about questions a great deal. I realised quite quickly that I am not primarily interested in questions. I am, however, interested in the philosophy the children are doing and I will ask whatever question serves to help them think more clearly about the ideas being discussed.

It seems to me that the philosophising doesn’t lie in the question, the philosophising is in how children go about trying to answer questions. So, a question’s ‘philosophicalness’ should be judged by how philosophical it makes the discussion. This is situational too. You can ask ‘in this a chair’ and have lengthy metaphysical discussion with some of my classes but if you ask that question in another context you will get some funny looks and absolutely no philosophy.

The biggest challenge is probably something we don’t realise yet. Most challenges or problems that we are aware of and understand, can usually be addressed. It’s the baffling things we didn’t anticipate that posed the greatest challenge (Trumps presidency comes to mind here!).

I have a sneaking suspicion that one of the problems we don’t yet realise or understand is how other people view p4c. I come across many head teachers, professionals and other people who have a different conception of what p4c is and what it is trying to achieve. Some conflate philosophy with psychology, some view p4c as a ‘hippy’ subject, others see any mention of philosophy as elitist or pretentious. There also are many that do understand it, but they are not the people that we should be trying to reach. Challenges to the future of p4c will come from those who misperceive it and I don’t think we know enough about who they are and how they view p4c.

If the questions are philosophical then engage with the ideas and be prepared to fumble through a lot of confusion. Most of the time conversation with children is led by adults, which is fine in most cases, we generally know how best to answer everyday questions in a clear direct manner. The adult informs or instructs the child and we move on. We are used to doing this because most questions require that kind of interaction.

Occasionally the question will be something philosophical (‘if I guess the answer, is that lying?’) and then you must shift into an enquiring interaction, where you ask the child what they mean, what they think lying is and what they think is the right thing to do. Their answers will be unclear and probably different from an adult’s but that’s ok, they are working through this complicated issue and should continue to try and makes sense of it for themselves, with your support.

As I may have let slip earlier, it’s not their questions that I think are important, it’s children’s responses to them but I did have a session with thirty 8-year-olds on making questions of a different kind. We had looked at a story, based on the Turing test. In brief it suggests that if a human was having a conversation with a computer in ordinary language and the human couldn’t tell if the responses were computer generated or human generated, then the computer could be considered ‘intelligent’ in the same way that humans are. I asked the children what questions they would ask if they were the human performing the test. Several said things along the lines of ‘Ask if it’s a human/when it was born/what it is made of!’. Then, one child said that we should ask “[increasingly] difficult maths sums, then if it got one wrong, they it’s a human”. I was surprised and delighted.

Who is Steve? Steve studied at the University of Wales, Lampeter gaining a BA in philosophy in 2003. Shortly after he began teaching English in both Italy and Portugal, returning to the UK to begin a career as a primary school teacher. Since he first started working within the British education system he has seen a philosophy shaped hole in the core of the curriculum and is striving to find ways for it to be filled, Joining the Philosophy Foundation
His work includes project management, development work in schools, and mentoring and doing philosophy with very small children.