Sabine Yang: "Wonder should be the core capacity that we human should always treasure."

I met Sabine Yang on facebook. Social media has been such a great tool to find and to talk about P4C with investigators, teachers, facilitators all over the world. Yang Yanlu (Sabine Yang) is from China; she's a Ph.D candidate from the department of Philosophy at ZheJiang University, major in German Philosophy. From 2013 till now, Sabine Yang is doing P4C at Kindergarten, Primary School, Bookstores, Libraries and other public places. 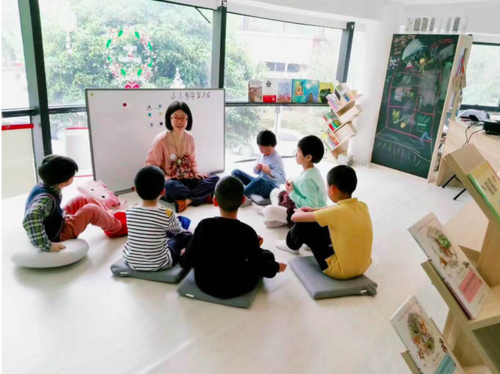 I was a little bit astonished and at the same time very curious about it. At that time I was doing my Master of Philosophy and I encountered a Chinese book about p4c, then I got to know there was a thing called p4c and started to practice it.

It was not easy to carry out this programm, since I was only a student and it was hard for me to find the kids. But later with the help of the community near my home, I organized a non-profit activity of p4c in my community. Even though there were few kids,maybe 3 or 4 at that time, we started to read the picturebook of Arnold Lobel, that was Frog and Toad, very dramatical story. The theme we discussed  was Bravery. Kids were very fascinated with the story and after reading the story they began to share their experience of bravery. Then we went to some deeper question, like should the bravery be afraid of nothing, what is bravery on the earth? That was my first p4c class, it was very interesting experience.

Definitely. We are facing the Artificial Intelligence Age, many people’s job will be later replaced by the machines. I was always wondering what could not be replace by AI. Yet the power of Wonder and the capacity to raise question belongs to human mind. P4C encourage children to raise their own questions and let them wonder about all the things they feel interested. As Aristotle once said: Man is desired to know. Wonder should be the core capacity that we human should always treasure.

Philosophy at schools are probably good to the reform of curriculum. In traditional classes, children have not so much freedom to raise their own questions and mostly they have to answer the question which they may be not so interested in. If a class of Math can combine some p4c elements, then the children could be better motivated to find the question and figure out by cooperation. Besides inter-curriculum, the sole p4c class is also benefit to the children, since they are quite relaxing in such kind of atmosphere, staying in circle and enjoying the place of intellectural and emotional safety.

I recognized the biggest question lying in the training of teachers. We’ve seen lot of teachers willing to change their pedagogical methods when the way of teacing are  implanted by p4c. But it’s still hard to make this change since we face the stress of established teaching objectivities and other rules in school. P4C pursuits the uncertainty of answer, which will be a conflict to a world, which is based on right answer  in the exam-oriented education.

When you hear about children’s question,you don’t have to reply at once. You should first examine the question: Is it a question that we could find the answer from google or any other books? Then just help them to  find them. If you realised that it was a big question like philosophical question, you can encourage the children to anwer first and then you discuss with them. Children’s questions are very diversed,sometimes adults would feel at a loss or embarrassed, sometimes even annoyed, but that’s quite normal. We can’t answer all the questions and not all the questions has the ultimate answer.

Yes, they surprise me all the time. For example, last Friday when we talked about “Share”, a young boy asked the whole class: Shall we share the death? Then one of the  student answered: I’d like to share, but I don’t wanna die! I also don’t wanna you die! Then replied the young boy: But we have to die. That question did make stress to us, and the students I observed were not happy anymore. Maybe it’s the time to deal with the thinking of death next class.