Michael Hand: "I think the biggest challenge for all advocates of philosophy in schools, whether they favour the P4C approach or not, is persuading governments and policy-makers of its educational value."

When talking with Laura D'Olimpio about P4C and this series of interviews, I had the chance to know Michael Hand and to know a little more about his vision of philosophy and P4C, nowadays.

Michael Hand is Professor of Philosophy of Education at the University of Birmingham. He is editor of the IMPACT pamphlet series and the Bloomsbury Philosophy of Education book series. Michael’s research interests are in the areas of moral, political, religious and philosophical education. His books include A Theory of Moral Education (Routledge, 2017), Education, Ethics and Experience: Essays in Honour of Richard Pring (Routledge, 2016), Patriotism in Schools (Wiley, 2011), Philosophy in Schools (Bloomsbury, 2008) and Is Religious Education Possible? (Bloomsbury, 2006). 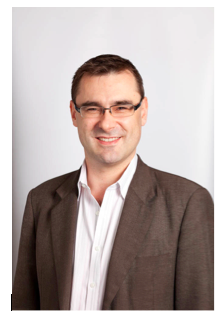 Can you recall the first time you heard about Philosophy for Children (P4C)? "It was while working on my doctoral thesis at Oxford in the late 1990s, I think. I joined the Philosophy of Education Society of Great Britain and started to meet people with an interest in P4C at PESGB events and conferences. Some of them were sympathetic to P4C, others fairly hostile."

Do you think P4C is necessary to children? Why? "I certainly think philosophy should form a part of every child’s education. There are problems and questions all human beings encounter in their everyday lives that cannot be adequately addressed without some acquaintance with philosophy. I’m thinking in particular of problems and questions in the areas of morality, politics and religion. I’m not wedded to the P4C approach to teaching philosophy, though. I think the community of inquiry model can be very effective, but there are other ways of teaching philosophy too."

From your point of view, why should we take philosophy to schools – kindergarten and early years?

"Education must equip children for life, and life throws up problems it is very difficult to solve without the aid of philosophy. That’s why philosophy belongs on the school curriculum. And it’s never too early to get started. As with other school subjects, there are ways to make philosophy accessible and enjoyable even for five-year-olds."

What makes an everyday question a philosophical question? "Most everyday questions are not philosophical, of course, but some certainly are. The ones I’m most interested in are questions about the justification of moral, political and religious norms. Why should I be a vegetarian, or vote Labour, or worship God? You can’t think seriously about questions like that without entering the realm of philosophy."

What’s the biggest challenge philosophy faces, nowadays? "I don’t know if it’s the biggest challenge philosophy faces, but I think important work in ethics struggles to get a public hearing because of a prevailing suspicion that norms and values are beyond the reach of reason. People accept that factual disputes can be settled rationally, by collecting and analysing relevant data, but they doubt that rational progress can be made with disagreements about values. So the arguments of ethicists are ignored, or dismissed as rationalisations of subjective preferences. I think that’s a serious problem for philosophy, at least insofar as it aspires to inform real-world decision making and policy formation."

And what about P4C? What are the biggest challenges that P4C faces, nowadays?

"I think the biggest challenge for all advocates of philosophy in schools, whether they favour the P4C approach or not, is persuading governments and policy-makers of its educational value. Why should room be made for philosophy in an already overcrowded curriculum? We have to provide a compelling answer to that question. In the next issue of the open access Journal of Philosophy in Schools, due out later this year, a group of us try to meet that challenge.

Michael, Laura, Pete and Angie Hobbs will be discussing "Why should philosophy be taught in schools?", next July, at the University of Birmingham. Please check out the details below: 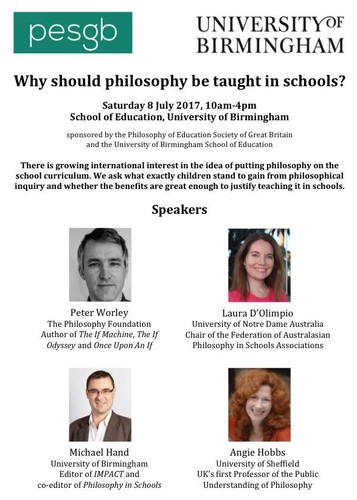