Grace Lockrobin: "I really do think a philosophical education is a necessity and not a luxury."

I met Grace on SOPHIA networking meeting @ Aveiro. On twitter, we can find her by the handle @thinking_space_  and I'm sure I've already RT some of her work. So, let me introduce Grace for you!

Grace is the Founder and Managing Director of Thinking Space, a social enterprise comprised of philosophically trained educators. Her work over the last ten years has been characterized by creative collaborations with prominent educational and arts organisations among them SAPERE, the Philosophy Foundation, CapeUK, Creativity, Culture & Education, The Baltic Centre for Contemporary Art and West Yorkshire Playhouse. Grace is a SAPERE trainer, a board member of SOPHIA and a member of the Philosophy in Education Project.

Grace has also taught philosophy in an academic capacity for a decade specialising in ethics and aesthetics. Now as a Teaching Fellow at the University of Leeds she runs ‘Leeds Philosophy Exchange’ - a project that brings together philosophy students, teachers and children in weekly PwC and incorporates an undergraduate module on philosophy with children. Leeds Philosophy Exchange also has a sister project at Bristol University. Grace and her Thinking Space colleagues recently organised an international conference on philosophical enquiry in schools at The University of Leeds.

Having previously obtained a first class Degree and Masters in philosophy, Grace is currently studying for a PhD in Philosophy of Education at UCL Institute of Education having been awarded a scholarship on merit by the ESRC. Grace has published articles and book chapters on a range of issues concerning philosophy and education. Through workshops, paper presentations and training, she has shared her academic thinking and her philosophy practice nationally and internationally. Somewhere in the middle of things, she is mama to Otto and married to Joe. They live together in Sheffield with their dog Darwin.

Grace, can you recall the first time you heard about philosophy for children (p4c)? "I became interested in philosophy with children when I was barely out of childhood (and barely into philosophy) myself. At the time, in my late teens, I thought I’d invented idea of working philosophically in the community. I remember being at a party late one night and telling a fellow philosophy student that that I planned to set up an organisation that would create opportunities for people to think philosophically together. Like all good ideas, someone had already thought of it, and once I discovered the work of colleagues around the world I realised that this idea – though not original – was at least possible. That was thirteen years ago and I have spent the intervening years dedicated to this project though both academic and community work. That imaginary company became a real company Thinking Space. Thankfully, I’m now joined by other entrepreneurial philosophers who share by obsessions."

How did you started working with p4c? "My first experiments with philosophical enquiry were in 2004 as part of summer schools for gifted children. During these sessions we talked very freely about philosophical stories, problems and paradoxes. At the time I had no pedagogy in mind besides the view that children should be actively doing philosophy and not simply studying it. However then – as now – I was also keen to find opportunities for the history of ideas to find a place I the work we were doing. These sessions weren’t didactic but they were connected to the wider philosophical landscape, drawing on key thinkers, texts and ideas. The work of Thinking Space began in 2007 with more creative work. I drew on the experience of educators I respected from drama, music and the visual arts. This was a time of generous funding for arts education in the UK (something we desperately miss) and this allowed me to do a great many exciting and innovative projects including collaborations with professional theatre makers in which we devised immersive theatre pieces based on philosophical thought experiments among them Nozick’s Experience Machine. This work brought philosophical enquiry to life in ways that I never thought possible and gave me an enthusiasm for philosophical enquiry with the public that has never waned."

"When we do philosophy, no matter who we are, we focus on the fundamental concepts that shape our understanding of ourselves, others and the world around us. In doing so, we hone intellectual, emotional and social skills that help us to think and to communicate our thinking more clearly. What aim for education is there than this?

I really do think a philosophical education is a necessity and not a luxury."

Nowadays children ( @ Portugal) have a lot of activities at school and after school. Why should we take philosophy to schools? "Philosophy is foundational, it sits under all of the school subjects asking questions about their key concepts but also their nature, purpose and value. So philosophy can complement what is already there.

It can also compete with other school subjects and extra-curricular activities. Children enjoy and benefit from the challenge of thinking and philosophy is the only subject dedicated to thinking well.

How is P4C developing in your country? "Philosophy is flourishing in the UK with the help of tens of philosophers and academic departments; hundreds of schools and educational organisations; thousands of teachers and practitioners; and tens of thousands of children and young people.

The results of a large-scale UK study on the effectiveness of P4C were published in 2015 generating further interest in this work and a second study is currently underway that I am supporting though my work with schools in partnership with SAPERE.

The main problem we face here in the UK is the government. There has been a very politicised shift in focus towards a so-called ‘knowledge-based curriculum’ with an emphasis on traditional academic subjects to the neglect of the arts and humanities. Philosophy is not part of the traditional curriculum – which is not necessarily a problem – but it is also not part of the educational vision of some politicians. This is a great shame but I look forward to more enlightened times."

"On the most part, it’s what you do with a question that counts. If you subject a question to decent philosophical methodology you’re on the right track. (For example, if you construct arguments, analyse concepts, give examples, draw distinctions, make comparisons, imagine possibilities, identify contradictions, consider implications etc).

However some questions are more philosophically promising than others. Questions that are concerned with rich concepts that connect to our concerns and about which we don’t agree are a good starting point. In philosophy with young children, we often talk about questions that no one can answer for us. Unlike the questions of science, logic or maths.

"I often feel pulled in two directions when I think about the future of P4C: I want as many people to enjoy and benefit from philosophising, but I also want them to get the best possible taste of philosophy. Sometimes these things are not compatible, as one of the ways P4C spreads is by word of mouth, and this mechanism results is well-meaning poor practice as well as much-needed enthusiasm.

It takes time and practice to make philosophy work in schools. I have been doing this my whole career and there is so much still to learn.

I used to suggest that teachers read up on (or listened to) philosophy following links like those below. But the reality is we are all so busy with personal and professional life that there are rarely enough hours in the day. Now I simply suggest that teachers use the time set aside for P4C in their class to do philosophy too. Not to join in as a participant influencing or interfering in the class discussion, but to quietly listen and to inwardly consider the positions offered as well as one’s own view.

This is much easier when teachers choose philosophical starting points that they are genuinely perplexed by rather than matters that seem obvious, or issues on which they expect the children to give certain responses. This allows you to listen to what the children actually say rather than listening out for certain answers you expect to hear or know to be true.

By doing this, one is more likely to develop as a philosopher as well as a P4C facilitator. Perhaps this will go some way towards addressing the issue of the dilution of P4C."

"Treat them seriously and enjoy taking about them together.

My child is one and just learning to speak. I will be so incredibly excited when the day comes that he asks a philosophical question for the first time. Poor thing!"

Did the children ever surprised you with a question? Can you share that question with us? "Because I am already convinced that young people can philosophise, I am rarely surprised when they do. Sometimes the impact of the work we do takes me by surprise. Here for example is a letter from a Y5 child we worked with." 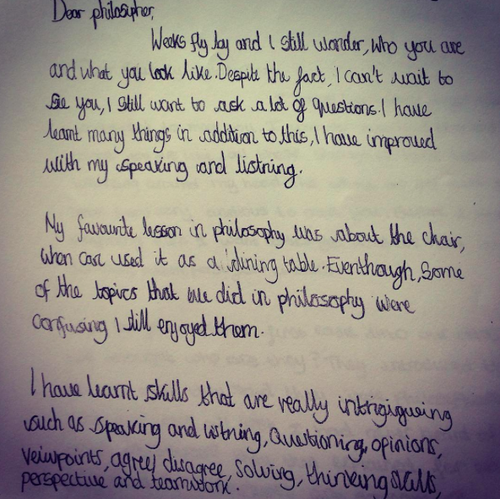 Please take a look at these links, shared by Grace (thank you so much!!!)

Philosophy Now: A magazine of Ideas https://philosophynow.org/
In Our Time: Radio Four Archive of programs http://www.bbc.co.uk/inourtimeprototype/

The Partially Examined Life: A podcast on Philosophy, philosophers and philosophical texts http://www.partiallyexaminedlife.com/

The History of Philosophy without any Gaps: A series of podcasts http://historyofphilosophy.net/

Aeon: Aeon is a digital magazine of ideas and culture. https://aeon.co/partners/oxford-uehiro

Practical Ethics: The he Practical Ethics in the News blog comes from the University of Oxford http://www.practicalethics.ox.ac.uk/blog
Philosophy Experiments: Interactive philosophy tests and activities designed to tell you what you don't want to know about yourself. http://www.philosophyexperiments.com/

The Sophia Project: An online collection of original articles, primary source texts, and commentaries in the fields of philosophy and ethics. http://www.sophia-project.org/